All You Need to Know About Automotive Air Conditioning 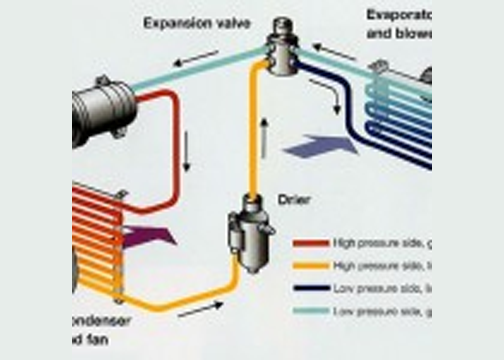 Everything You Need to Know About an Automotive Air Conditioning

Have you ever experienced sitting at a traffic light in the middle of a July afternoon and sweat dripping from your neck all the way down your back, creating a damp spot between you and the seat? That particular feeling can be quite uncomfortable. So you wonder, what’s missing from this picture? Obviously, your automotive air conditioning isn’t functioning properly, which is why you feel uneasy. It is a horrible thing to have your air conditioning break down on you during the summer heat. Therefore, it is best that you have your car air conditioning serviced by a licensed mechanic so as to avoid the unnecessary discomfort.

The first ever automotive AC was introduced back in 1939 by Packard and it was the first car company to offer it in 1940. Ever since then, the air conditioning system has worked very much the same way. However, the refrigerant used in the early cars, called R-12, CFC-12 seem to have negative impacts on the ozone layer and were ultimately banned and replace with a substitute known as R-134a or HFC-134a. The automotive air conditioning functions through three main parts – the compressor, condenser and evaporator.

The compressor is basically the pump, which is attached to the engine’s crankshaft through a belt. Initially, the compressor is at a low-pressure gaseous form when the refrigerant is drawn into it. As the gas is pumped into it the compressor comes to life. The function of the belt is to put pressure on the pump, which releases gas into the condenser. Keep in mind that the compressor cannot condense liquids, only gases. There are other parts of the air conditioning system that capture the water and prevent it from entering the AC loop.

The condenser is characterised as a radiator, which exudes heat out from the system. As mentioned earlier, when the refrigerant is drawn into the condenser, it creates pressurising gas from the compressor. This pressure creates heat, but it is instantly cooled off because of the air flowing around the twisting tubes of the condenser, transforming it into liquid again. It is very similar to the concept of cooling down steam and condensing it back to water. The liquid refrigerant has now transformed into a high-pressure liquid, which is used to cool the car.

Before the liquid reaches the evaporator which is situated in the cabin, the refrigerant needs to be prepared for the evaporator. As the liquid exists the condenser, it is transported through a small reservoir known as the receiver-dryer where desiccants, tiny granules attract water. Similar desiccants are found in shoeboxes as well. This is where all the water is removed, preventing it from entering the system. In case the water is released into the system, it will form ice crystals, which can harm the air conditioning system. The liquid travels through an expansion valve before entering into the evaporator.

This is where all the magic takes place. While all other components are situated in the engine compartment, this particle part is located in the cabin and looks similar to a radiator as well. Its job is to attract heat rather than dispel it. The liquid enters the evaporator at a temperature of 32 degrees and although the refrigerant doesn’t freeze, it has a very low boiling point. The heat within the cabin of a car is quite adequate for the A/C refrigerant (eg R134a or R1234yf) in the evaporator to heat up and transform into gas. This gas is then released in the passenger compartment and the fan blowing on the outside of the evaporator coil releases cool air.